Valley Forge Tape & Label Co., Inc. recently received a call from the Design Producer for the Television show Extreme Makeover: Home Edition.  Extreme Makeover renovates homes for people who are experiencing financial problems or some other kind of stress, like health problems or a recent death in the family. 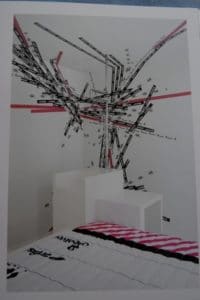 The Design Producer, who reports to the Host, asked if we would be willing to contribute a custom label product to an upcoming episode.  The producer emphasized that they always work on a tight schedule.  They would need the product by the upcoming Friday because they had sent the family to Disney World and they would be surprising them on that Monday.  The episode was for the Marshall House in Vermont.  The family was struggling as they had a son who needed cancer treatment, their house needed work, and they had very little money. Their young son was so positive that he was able to keep everyone in his family positive, even when they weren’t sure how things would work out. He would constantly tell himself and his family to “Be Positive…Be Courageous…”

The plan for the Extreme Makeover team was to renovate the family’s home while they were away.  In particular, they wanted to do something special for the son’s room. They wanted to reinforce the idea of his positive outlook on life even though he was going through such a rough time. The Host had the idea of converting the son’s room into a fun space with a “BE POSITIVE” message.

The Design Producer sent us a concept and asked if we had any ideas on how to create a  custom label/tape product that they could use to decorate the boy’s room.  This would be in addition to other “BE POSITIVE” themes.  The original concept was a kind of an array of overlapping strips with various messages. The adhesive on the tape had to be strong enough to stick to walls but would come off cleanly when the family wanted to take the tape off. 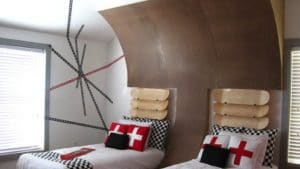 We had to quickly come up with a solution that would work. After some discussion with the Extreme Makeover Team and our production team, we decided on a continuous 1-1/2” label strip with 4 messages:  “BE STRONG” and “B +”with white letters on a black background.  “BE COURAGEOUS” and “B +” with white letters on a red background.  We even included some solid blank red and solid black tape.  This custom label was actually a continuous label stock, with a liner, that had a special repositionable adhesive – the exact kind of adhesive that would work for this application.

Being on time is an important detail that Valley Forge Tape & Label Inc., prides ourselves on.  Needless to say, we were on time.  We express shipped the label strips to the Extreme Makeover team who were then able to apply the label strips in time for the family to be surprised on Monday.

Below is the finished product. This is something that VFT&L is proud to have participated in.  A rewarding experience for all! 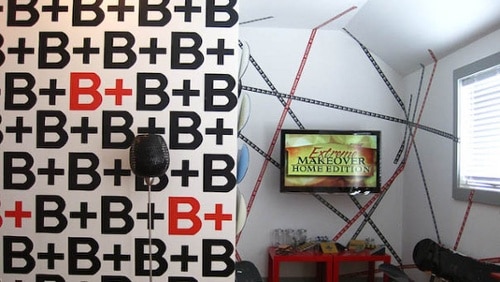 Get your quote today!